In the July 2020 Plan for Jobs announced by Chancellor Rishi Sunak, an investment fund of £111 million is available to assist the largest development ever for traineeships and employers that provide a traineeship. An employer can claim a £1,000 bonus for each trainee that is enrolled under this new traineeship programme. The new project will help young people learn new skills and experience that will assist them in finding employment or an apprenticeship or equip them for further study options.

Registration for applicants for this scheme can now be made online here. The bonus of £1,000 will be available to employers to claim until 31st July 2021 and will help employers with the traineeship costs such as uniforms, travel cost and providing facilities. The maximum number of trainees an employer can claim under this programme is 10 trainees. Employers can claim this incentive of £1,000 per trainee for any trainee placement they have since 1st September 2020

The traineeship programme period will last for a period of at least 6 weeks and can be as long as 12 months. The programmes will help the trainees develop skills for the workplace such as digital skills in conjunction with English and maths skills. Traineeships will be combined with job placements for a minimum of 70 hours.

Research has shown that traineeship programmes have previously assisted nearly 120,000 young people since 2013 and two thirds of trainees either progress to employment or study further or partake in an apprenticeship within six months of completing the traineeship programme.

The Low Pay Commission’s recommendations for the new National Minimum Wage were approved by Government and these new wage rates will come into effect on the 1st April 2021. The National Living Wage of £8.91 per hour will now be paid to employees aged 23 years and over instead of the previous age threshold of 25 years and older. This is an increase of 2.2% from £8.72.

As there was no Autumn Statement or Budget from Chancellor Rishi Sunak, the financial secretary to the Treasury, Jesse Norman announced a written ministerial statement in the House of Commons with details of the increase of the National Insurance thresholds. The 2020 Autumn Spending Review confirmed that the personal tax allowance and tax basic rate threshold would increase by 0.5%. This is based on the consumer price index.

Please see some rates details below:

The Living Wage Week took place from 9th to 15th November 2020 and as part of this week the new living wage rates details were announced. The new rates apply to employees aged 18 years of age and older from 9th November 2020, but employers who are already part of this scheme will have six months to apply the new pay rises.

The new London Real Living Wage announced by the Living Wage Foundation, has increased by 10p from £10.75 to £10.85 per hour. This helps reflect the higher cost of living facing families in the city. The UK Living Wage rate has increased by 20p from £9.30 to £9.50, an increase of 2.1%. The Government's current national minimum wage for over 25s is £8.72, which is £78p less than this rate.

The total number of accredited Living Wage organisations is nearly at 7,000. Over 800 employers have been accredited by the Living Wage Foundation since the start of the Coronavirus pandemic. New companies that have signed up include Capital One, Tate & Lyle and All England Lawn Tennis Club.

Chancellor of the Exchequer Rishi Sunak presented Budget 2020 to Parliament on 11th March 2020. The main points to be noted by employers are:

2018-19 Rates and Thresholds for Employers

For the new tax year 2018-19, the Department for Work and Pensions have published the statutory payment rates for benefits and pensions.

Please see some rates details below: 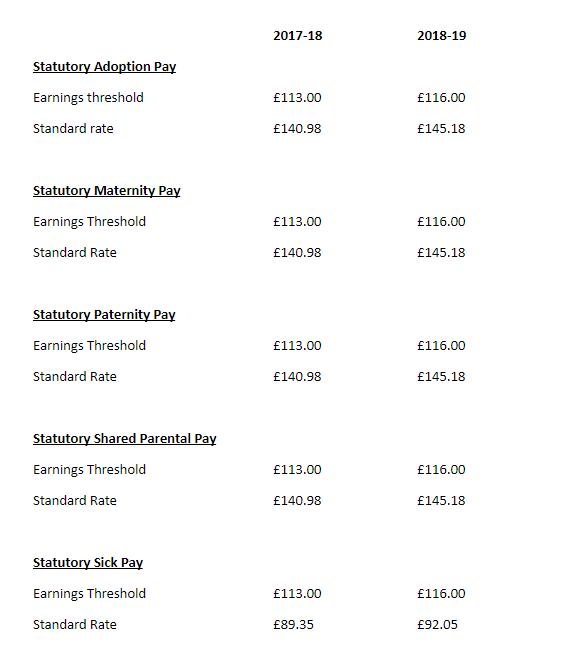 The UK’s gender pay gap has risen. Here’s how you can help.

The Prime Minister has announced that she is taking action to close the pay gap between male and female employees and ultimately improve workplace equality.

This push being taken by the Prime Minister came after new figures were published. The figures showed that the UK’s overall gender pay gap has risen to 18.4%. Interestingly, the gap for full time workers has fallen from 9.4% in 2016 to 9.1% in 2017.

By law, businesses with 250 plus employees must report the pay gaps and bonus data as a mandatory requirement.

In a bid to seal the gender pay gap The Prime Minister is now asking all companies for their help.

“The gender pay gap isn’t going to close on its own – we all need to be taking sustained action to make sure we address this.”

Here are some of the recommended ways that all businesses can help:

The Low Pay Commission’s Autumn 2017 report has been published and on the 1st April 2018, the minimum wage will increase again.

The National Minimum Wage (NMW) is the minimum pay per hour most employees are entitled to by law. An employee's age and if they are an apprentice will determine the rate they will receive.

The UK's unemployment rate has fallen to its lowest level since 1975, according to official figures which also show a growing gap between price rises and wage growth. The unemployment rate fell to 4.3% in the three months to July, down from 4.4% in the previous quarter and 4.9% a year earlier.

The employment rate, which measures the proportion of people aged 16- 64 in work, hit 75.3% - the highest since comparable records began in 1971. In total, there are 32.1 million people at work in the UK, according to the figures, or 181,000 more than the previous quarter.

While that performance suggests the labour market is continuing to shrug off uncertainties and other headwinds in the wake of the Brexit vote, the figures also highlighted a worsening squeeze for family budgets. It is also reported that average wage growth remained static at an annual rate of 2.1% over the same three months. With inflation coming in at 2.9%, the real value of wage growth is falling.

If you are considering employing an apprentice there are some things you should know:

If you employ an apprentice you may be eligible for an apprenticeship grant of £1,500 if you have less than 50 employees and your apprentice is aged between 16 and 24.

If you are providing the training you can apply for training funding to cover some or all of the training costs.  Further information is available on the HMRC website.

Employers who have an apprentice will not be required to pay employers National Insurance Contributions (NICs) on their earnings if they are under 25, earning below £45,000 and on an approved UK government apprenticeship.  National Insurance category ‘H’ is to be used for apprentices under 25 in qualifying circumstances.