If you discover an error in any of the year to date totals submitted in your final FPS or Additional FPS for 2015/16 and it is now after 19th April 2016, then only an Earlier Year Update (EYU) can be submitted.

An EYU simply reports the adjustment made in the payroll as opposed to reporting restated year to date totals for the tax year to HMRC.

If you previously submitted a year to date pay figure of £10,000 for an employee on your last FPS for the year, then realise that the figure should have been £12,000, after making the correction, the EYU will submit the change to the pay figure as ‘+£2000’.

Please note: BrightPay can only facilitate the production of an EYU when the payroll has been processed and submitted to HMRC using BrightPay i.e. that the full payroll history is present.

The software is not able to produce an EYU in any other circumstance (e.g. when payroll has been submitted using another software) - instead you should use the free ‘HMRC Basic PAYE Tools‘ software to submit the return.

Details of how to do this can be found on the HMRC website at:

Simply select the employee(s) for whom you have made adjustments and submit the EYU to HMRC: 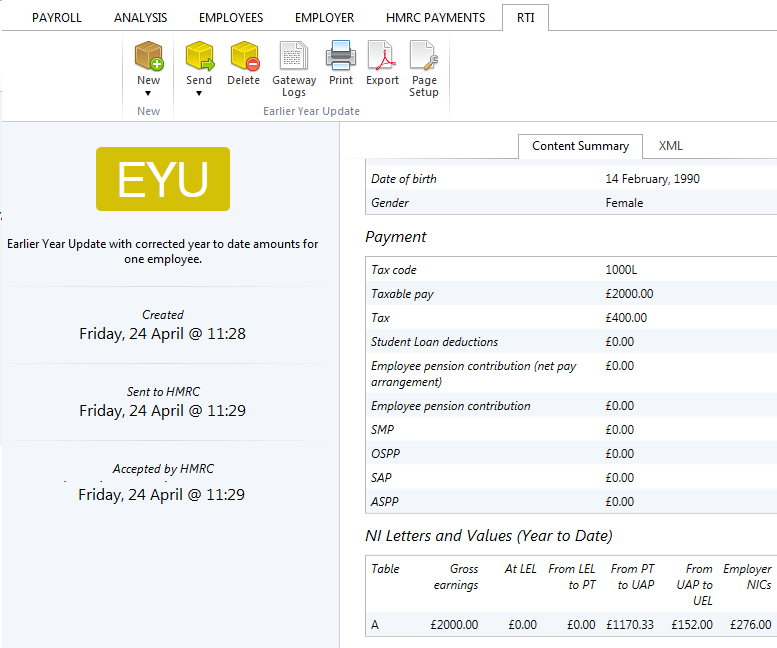 Please note: If a payroll correction has also led to a change in your recoverable amounts, it is important to also submit a new Employer Payment Summary to HMRC, in addition to the Earlier Year Update, to inform them of your amended year to date recoverable amounts total.

If you need to submit more than one EYU, each submission will only reflect the amount of the amendment from the last EYU submitted.

EYUs for the tax year 2015/16 may be prepared multiple times as required, without limit, and will be accepted by HMRC for a period of 6 years.